Sadler was working a kicking camp near Waukesha, Wisconsin; current Nebraska punter Sam Foltz was in the same car as Sadler and was also killed in the crash. Details about the incident will be forthcoming from law enforcement officials in Waukesha.

Michigan State will provide more information on services, condolences and memorials when they are available.

Michigan State head coach Mark Dantonio:
“We are deeply shocked and saddened to hear the extremely tragic news about Mike Sadler’s death. Our thoughts and prayers are with the Sadler family, his teammates, friends, coaches and Spartan Nation. We also express our deepest sympathies to the family of Sam Foltz and the Nebraska program for their loss.

“Mike impacted so many people not only as a football player, but also from an academic standpoint and in the community as well. The world has lost a rising star who dreamed big and was accomplishing those dreams, one after another. He was one of those people that brightened your day. I always say to try and be a light, and he truly was a light in this world.

“We will all miss him dearly. Once again, we find out that life is so fragile. The world will be a sadder and lonelier place without Mike Sadler in it. May he rest in peace.”

Michigan State Athletics Director Mark Hollis:
“Today is a sad day for Michigan State, Nebraska and all of college football as we mourn the loss of two exceptional young men in Mike Sadler and Sam Foltz. Our thoughts and prayers are with their families and friends in this time of sorrow.

“Mike was the epitome of a student-athlete, excelling in the classroom and on the field, while his quick wit brought a smile to everyone’s face. Most importantly, he represented Spartan Nation with great class, embracing his place as a role model for both kids and adults alike. On a personal note, he was more than just a student-athlete to me; he was a friend. His ability to make everyone feel special was but just one of his many special qualities. And that’s the reason his impact will be felt by everyone who knew him for years to come.

“By all indications, Sam was the exact same role model for the Nebraska football family. While today is filled with sadness and reminders of the fragility of life, we can take solace in knowing that we are all better for having known Mike and Sam.”

Mike Sadler (1991-2016)
On the field, Mike Sadler was a master of his craft and one of the greatest and most productive punters in program history. In the classroom, he achieved an ever rarer feat, becoming the first student-athlete at Michigan State to earn Academic All-America honors four times.

A member of the 2014 National Football Foundation Scholar-Athlete Class, Sadler was one of 17 finalists for the William V. Campbell Trophy, which is given to the nation’s top scholar-athlete.

A native of Grand Rapids, Michigan, Sadler graduated with a bachelor’s degree in applied engineering sciences in May 2013 with a 3.97 grade-point average. He received his master’s degree in public policy in May 2015 with a 3.84 graduate GPA. Sadler was scheduled to begin law school at Stanford this fall.

Sadler also was a four-time Academic All-Big Ten selection (2011-14) and a two-time Big Ten Distinguished Scholar (2012-13). He was presented the scholar-athlete award at the Spartan Academic Excellence Gala three consecutive years (2013-15) for having the highest GPA on the team for players who have reached at least junior academic status.

Sadler received the Big Ten Conference Medal of Honor in 2015. 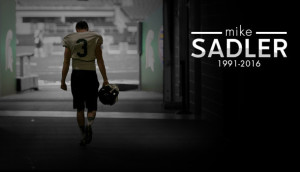