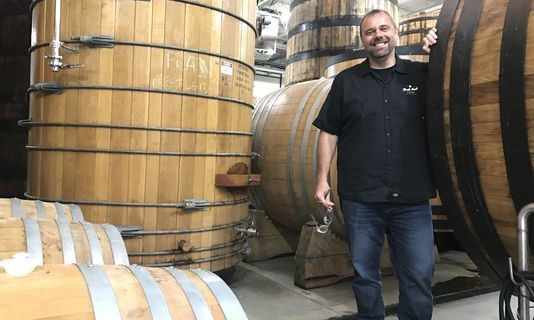 Making beer – especially the sour variety – is an exact science, and the former Michigan State football player is talking about fermentation, bacteria and natural carbonation.

“We just let Mother Nature do her thing. We don’t fake the funk,” said Grant, standing inside a 25,000-square foot warehouse at the Northern United Brewing Company building in southeast Dexter. “Sour beers the next ‘big thing.’”

And he loves to talk about craft beer. He has an engineering background, and it doesn’t take much prompting to release the nerd inside.

“He will take people for tours and talk about the tanks, equipment and history behind it all,” said Angela Grant, Tony’s wife of nearly seven years. “When I go with him, I blank 10 minutes in and am bored. He is so fascinated by it. It blows my mind how much he learned about it.”

And in just a few years. Tony Grant left a job as a director of Owens Corning behind in 2012 to join six partners in the micro-brew business.

On the other side of the warehouse, packaging, kegs and carbonated cylinders sit in rows. This is where they make the the IPA, stouts, wheat beers and all the rest, a totally different process from the one that goes on in the sour side of the building.

Grant ticks off the differences. He calls the process “old world” and “romantic.”

“I have just absorbed everything about beer here,” he said with a smile. “We are always creating and learning. If I’m getting into too much detail you can stop me anytime.”

Grant says the teamwork and collaboration are imperative to this operation, from Jolly Pumpkin brewer and founder, Ron Jeffries, to the guy who sweeps the floor. Like a football team, everyone needs to buy in, whether it’s the quarterback or the long snapper.

And Grant knows a thing or two about that.

Coming out of Bay City Western High School, Grant was a three-year starter at offensive and defensive tackle for the Warriors. Standing at 6’ 2” and roughly 260 pounds, Grant was a two-time all-state heavyweight wrestler.

He was massive on the wrestling mats, but not so much when it came to playing on the line at the collegiate level. That’s when he decided to learn the art of long snapping.

Because of this specialized position, he quickly garnered the attention of the in-state powerhouse Michigan Wolverines. For most football players, heading to Ann Arbor would be a dream come true.

“I wanted to go to MSU, but they weren’t offering,” said Grant, whose sister, Angelique, attended MSU along with local childhood hero, Chris Willertz, who played on the 1988 Rose Bowl team. “I grew up going to games in East Lansing and always just pictured myself playing there.”

Instead, Grant left the hay fields of Monitor Bay Township and headed to Ann Arbor.

He made it through mini and veteran summer camps with the Wolverines. He wore the famous helmet and lined up with Tom Brady, Dhani Jones and Heisman Trophy winner Charles Woodson. Grant was tabbed the opening day starter at long snapper and saw time on the Wolverines offensive line.

Just days before classes at UM would begin, Grant decided it wasn’t for him.

“I was overwhelmed and not ready for it,’ Grant said. “I couldn’t get the plays down. As smart as I was, I couldn’t memorize the plays. I didn’t think I wanted to play anymore. I just wanted to be a student and decided that I was going home.”

Grant enrolled at Delta College and became that average student, but it didn’t take long to get that post-football itch, he said. It didn’t help that the Wolverines won the 1998 Rose Bowl and claimed the school’s 11th national championship. That and a little prompting from a former high school classmate.

“This guy came up to me at Delta and said, ‘Wow, Tony Grant,” he laughed. “’What are you doing here? Shouldn’t you be out doing big, important things?’

Grant transferred to MSU, where he was a long snapper for the Spartans from 1998 to 2002, “throwing back seeds” to the likes of MSU kickers Craig Jarrett, David Schaefer and Dave Rayner, among others. During his junior season, which Grant called “flawless,” he was named the team’s “Unsung hero.”

That’s the name of the game for a long snapper. “No one knows your name unless you are messing up,” Grant laughed.

He was named the nation’s top player at his position and earned numerous tryouts in the NFL with the likes of the Redskins, Panthers, Bills and others.

A pro-football career never panned out, but that’s what has led him to this massive brewery.

Shirts, six packs and individual bottles line the wall of the tasting room. Northern United Brewing Company headquarters has the appearance of a restaurant inside the front door with booths, barstools and high four-top tables.

For Grant, this love affair isn’t strictly about suds. It’s about family.

During his first day on the job in 2012, in this very building, Grant said the excitement of starting a new career was tempered when he received a phone call from his wife. She had just returned from the doctor’s office and the prognosis wasn’t good.

“I told my partners that I was going to be distracted for a while,” Grant recalled.

Their response is the reason Grant is so passionate about this business.

“They told me they were going to give me my full pay and insisted that I spend time with my family. That compassion and commitment to me blew me away. I couldn’t ask for better partners.”

Angela Grant said she couldn’t have asked for a better partner, either.

“He was amazing,” Angela said. “He was loving and went down with me for every single doctor’s appointment. He was just there to let me cry and to sit there with me when I cried, just to get it out. There are no words for it. He was my rock through it all.”

She has been cancer free for nearly five years. Grant gives the wood-top table a few knocks. The prognosis is looking more promising by the day, but the couple learned early on that they would not be able to have children. If they wanted kids, adoption was the only route.

Their daughter, Alyssa Grace, will turn one on July 19.

A row of five small glasses sit atop a wooden plank. The beer inside ranges from dark red to yellow, from left to right. Grant says the left side is easy on the palate of a normal beer drinker. The two on the right are bitter, his new sour concoctions.

These are just a few examples of the beers that have helped open tasting rooms in Detroit, Ann Arbor and Traverse City. A new location in Chicago is in the works. Royal Oak and Bay City could be in play soon, too, and with restaurants.

This brewery produced nearly 10,000 barrels of beer in 2016. That’s not big compared to the industry standards, but what Grant appreciates about this— company is the “TLC.”

“The quality and consistency is really cool,” he said. “This isn’t your garage house brew.”

July is a month of celebration for the Grant family. It’s their wedding anniversary, daughter’s birthday and Angela’s “cancer-versary.”

“We are so blessed. So, so blessed,” Angela Grant said.

“Life is good,” Tony Grant smiled. “I have no complaints. I was so depressed when I left UM, and look where I am at now.”