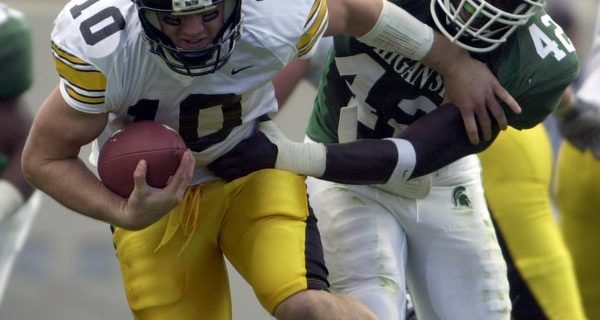 Labinjo’s death was announced Saturday evening by his former CFL team, the Calgary Stampeders. The cause of death was not announced.

“We are deeply saddened to learn of Mike’s death,” Stampeders president and general manager John Hufnagel said in statement released by the team. “He was a big man with a big personality to match and he was a key part of our Grey Cup championship team in 2008. The team offers its condolences to Mike’s family and friends.”

Labinjo, a Toronto native, played for the Spartans from 2000-03. He was an honorable mention All-Big Ten selection and named the team’s defensive MVP in 2003. Labinjo led Michigan State in sacks in 2001 with five and tied for team lead in interceptions in 2003 with three. He ranks ninth in program history in tackles for a loss with 35.

Although he wasn’t selected in the NFL draft, Labinjo spent three years in the league (2004-06) and had stints with the Philadelphia Eagles, Indianapolis Colts and Miami Dolphins. He played 10 career games, including a Super Bowl loss to the New England Patriots as rookie, and finished with 19 tackles and a forced fumble.

Originally selected by the Stampeders in the third round of the 2003 CFL draft, Labinjo signed with the team in 2007. He had 61 tackles in 44 games before being released in 2011.

According to the Stampeders, Labinjo continued to live in Calgary after his football career ended and worked for Solengo Capital and FirstService Residential.